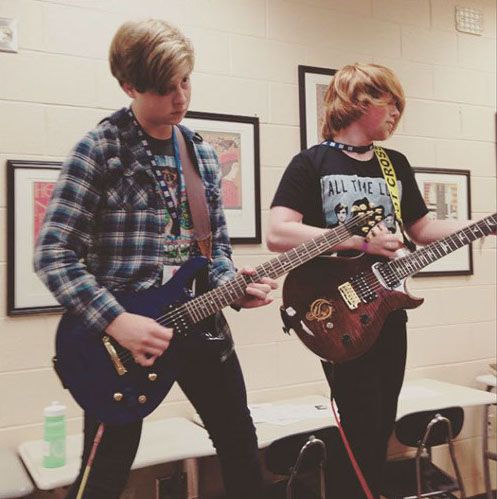 Walking into Mt. de Sales Academy’s Zuver Center, I’m greeted with a manic blast of guitar and drums from the band Failing Acts of Society. As the name might suggest, it’s beautifully angst-y pop punk wrenched out at no less than 120 decibels. There’s no one in the audience, but these guys are putting on a show. Legs spread wide, guitars slung low, they’re on top of a table, they’re jumping off the table, they’re quite literally bouncing off the walls. As a camp coach, I should probably be concerned, but who am I to interrupt three-chord rock and roll bliss?

Further down the hall, there’s a hip hop collective dubbed Leaders of the New School (a.k.a. Rap Room) shepherded by Floco Torres and Vinson Muhammad that rivals the Wu Tang Clan in size and – no hyperbole here – talent. They’re trading verses over a looped 808 beat in a seemingly endless cipher. You’ve probably seen Floco or Vinson perform around town. You probably even thought they but on a pretty good show. I’m here to tell you that their true talent is as camp coaches. In that role, I’ve seen them rap for eight hours straight, five days in a row and counting. Somebody call Guinness. Somebody get those guys a Guinness. They deserve it.

Downstairs, there’s a jazz band with no less than eight horn players learning the intricacies of improvisation from resident sax guru Matt Miller; a gospel group is tucked into a quiet corner perfecting their harmonies in preparation of recording their track in one of the camp’s three studios; A folky girl group is in the hall, eyes closed, strumming a guitar and singing like they’re soaking up the the 1967 Laurel Canyon sunshine rather than fluorescent light against white cinder block walls. I just saw Michael Suhr from Dalmatian perform the most delightfully weird falsetto version of the Carter Family’s “Wildwood Flower.” Somehow, I think Mother Maybelle might be impressed. Everywhere, there are snare pops, screeches of guitar feedback, whale songs of basses being tuned, horns farting and pianos tinkling. It’s enough to drive any normal person nutty, but for musicians, it’s catharsis.

Early in its second week, these campers are cycling on and off the main auditorium stage, already rehearsing for what is sure to be an impressive show on Friday, June 12. Somehow the barely controlled chaos of a group of fifty exhausted campers will put on a showcase of the songs they’ve written over two weeks – they’ll also be handling sound production, light design and stage management. It’s always an impressive feat, and it’s a live music event not to be missed.

In the eight years I’ve worked Otis Music Camp camp, I’ve seen campers mature into coaches. I’ve seen campers who came in only knowing one Zeppelin riff grow into guitar virtuosos. I’ve seen campers go to college for degrees in music business and production, attend Berklee College of Music’s summer programs and intern at BMI and SESAC thanks to the continued support of the Otis Redding Foundation. Led by Otis Redding’s daughter Karla, they’ve done an impressive job striking the delicate balance between respecting their musical past and progressively caring for its “future condition,” as Otis Redding himself put it in his “Stay in School” radio spot.

Most importantly, these campers-turned-coaches come back to Macon each year to give back to the camp that afforded them the opportunities. They mingle with stalwarts of and newcomers to Macon’s music scene. New relationships are formed and new collaborations are born. The community continues to bloom – what started humbly as a songwriting camp with a handful of counselors and about 10 campers has grown into a two-week journey through all aspects of the music industry for over fifty campers. And with the announcement that the Redding Foundation is working on a year-round music academy and charter school, that community will continue to develop. I can’t wait to see what the next eight years of performances look like.