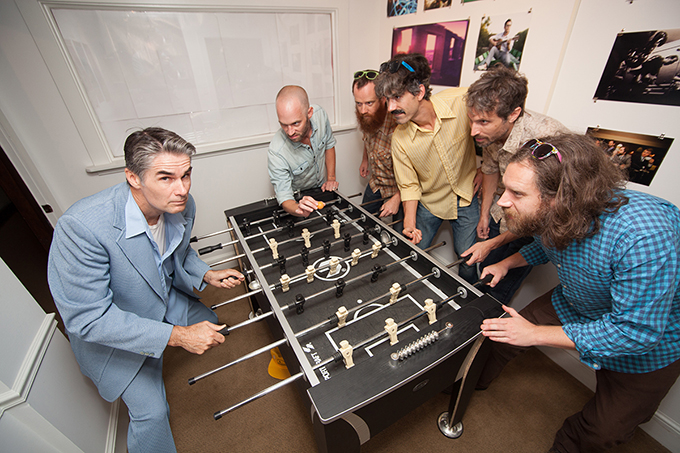 Of his own craft, Harry Crews wrote, “I didn’t know any storytellers who wanted an adjective – Southern or gothic or ethnic – in front of the word novelist. I told them that I was a novelist from the South and that I had no alternative but to write out of the manners of my people.” Jim White, who appeared alongside Crews in Searching for the Wrong-Eyed Jesus, the film that drew its name from his first album, would likely support that statement, if only the word novelist was substituted for songwriter. White is an astute observer of mankind and his place within the chaos it creates, and his music is resonant in any geographical setting, even if he does choose to live in the South. Or perhaps he knows what renowned music historian Bill Malone posits: that all music is inherently Southern music, its influence inescapable, and he has journeyed to find the source.

Whatever the case may be, White’s residency in Athens, Georgia eventually led to his path crossing that of the Packway Handle Band. According to press surrounding the release of Take It Like a Man, the pair’s collaborative album, White jumped at a chance to join the band when they asked for his services in producing their new record, having reserved a cache of unreleased bluegrass songs over decades of writing. A partnership between the Packway Handle Band and Jim White immediately makes good sense. They both share the same black humor and lighthearted sarcasm; both draw on those themes that drive critics to employ certain adjectives that mark a region – sin and salvation, heaven and hell, simple, brutal beauty. Often times they transport the characters that occupy those spectral spaces down to earth, where they can perhaps be encountered filling up the RV at the next rest stop or sobering up at a jailhouse in rural Alabama.

For the live performance of songs on the record, the group lined up across the front of the stage, Jim White seated on the left, surrounded by various and sundry instruments and noisemakers. Seeing the Packway Handle Band in that position is a bit odd, as it’s a departure from the single microphone aesthetic that the band usually employs. With that setup, the microphone becomes part of the performance, with band members rotating in and out as their featured parts come and go. With over a decade of performances under their belt, it has evolved into a well-oiled machine, and it’s definitely something to behold. The setup across the front of the stage with Jim White as the sixth man is less intimate, but it is more inviting to an audience and works better on a larger stage.

On the songs led by the Packway Handle Band, Jim White functions as all great producers do – he’s able to insert himself into the band’s sound without any obvious intrusion. With White at the helm, Packway Handle Band sounds less like a group of newgrass pickers and more like the type of music John Hartford’s Aereo-Plain Band might be playing were they still around. On the songs written by White, the Packway Handle Band adds their signature touch, bringing new life to several of his songs, including the well-known “Jim 3:16.” The two acts compliment each other well, making the “vs.” that was given to the title of the collaboration seem out of place. To one who isn’t familiar with the back catalog of either act, the pair is so symbiotic that it would be hard to tell where one songwriting credit ends and another begins.

That feeling lasted up until the last song of the set, when the show ended as many Packway Handle Band shows do – with the band jumping off the stage to join the audience in a tight circle, shouting with the enthusiasm of a tent revival meeting, the stomping the floor either sending the devil back to hell or knocking on heaven’s door to invite Jesus to the shindig. And Jim White, the smiling Trickster with a washboard, stands on the outer edge of the group, looking like he’s having the time of his life.