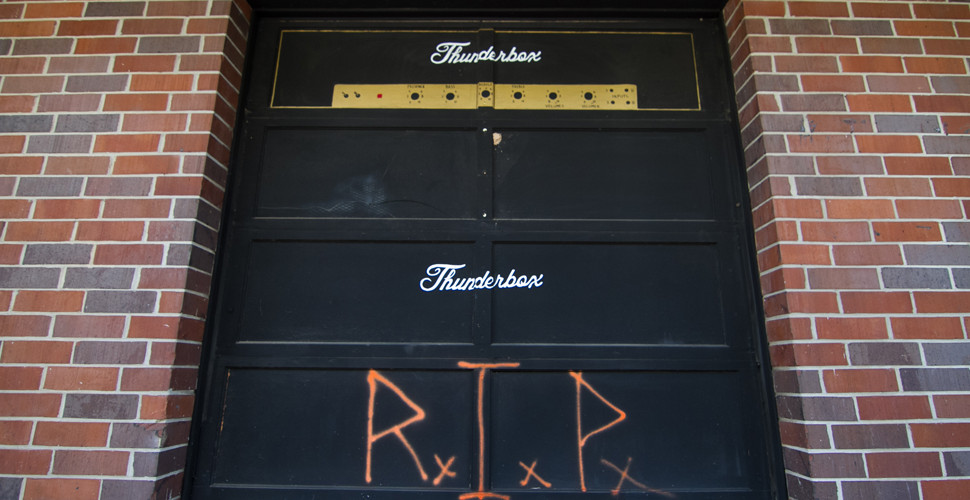 For the Macon Telegraph:

On May 11, the Thunderbox, Atlanta’s fabled rehearsal studio and training ground for a eclectic group of musicians spanning multiple genres, did not open its doors.

The building became the latest victim of the Atlanta Beltline’s gentrification-laced path during what became a bummer of a summer as far as news of Atlanta’s music scene was concerned.

What was once a nearly forgotten stretch of property is now prime-time real estate as white flight reverses its course, sending scores of residents back inside the perimeter looking for walkable, bikeable, concentrated pseudo-communities marked with price tags that would make the average working stiff swoon — essentially resulting in what Chad Radford, writing for Creative Loafing, calls an “expensive monoculture.”

Perhaps it would behoove the city of Macon to look north of its borders for a lesson in city development. A common thread among those pressed to give reasons why they would choose to live in Macon is the diversity of colorful characters who also choose to set up residence here — especially within the borders of downtown, an area that is currently in the throes of revitalization and preservation.

As development tends to happen at a glacial pace in our fair city compared to elsewhere in the country (“Macon: It’s Slower Here” / © Jared Wright, 2015), the city has time to step back and look objectively at the course it’s on.

I would encourage those who have the means and the ability to guide downtown development to plan carefully and entrench themselves in the discourse that is happening in places such as Atlanta, where a cultural war is currently boiling over as the city experiences growing pains.

Macon by no means has a music scene that rivals those established in Atlanta or Athens, but there is activity, and it is growing, slowly but surely. Many of the people quietly nurturing that scene choose to live in downtown Macon, a place where rent can still be found cheap, but increasingly less so as that glacial pace is thawing, and seemingly every available historic structure is being repurposed into high-end lofts, restaurants and bars.

Walkable, bikeable living is great, especially if there are a selection of nice restaurants and bars in the proximity. But restaurants and apartments by themselves cannot create cultural depth for a city. And, if building these places comes at the expense of stripping a sense of place imbued by a creative class of artistically innovative individuals, the only thing left is soulless strip-mall suburbia on a smaller scale.

As Macon moves forward and plans are laid for downtown development, contingencies ought to be made that will allow for comfortable standards of living without forcing out those who have played a part in making downtown Macon a vibrant place.

Macon has always been a touch quirky in its progress, and the creation of living, working and playing spaces with cross-cultural benefits certainly can be accomplished. However, the effort must be made to address those needs before the city finds itself in a situation similar to Atlanta’s, years later and still neck deep into a multi-million dollar project that is now displacing many of the creative types who made places like the Thunderbox desirable locations.