This West Georgia Music Heritage Trail proposal was written as part of a public history class at the University of West Georgia. From the proposal overview:

In partnership with the Haralson and Carroll County convention and visitors bureaus, this is a plan to identify areas of importance in West Georgia’s musical heritage and present these stories to the public in a way that will not only promote historical knowledge within the region but also promote in influx of tourism to the region. Through this, the groundwork will be laid for an eventual regional music heritage trail.

The first task will be to conduct thorough research of the region’s musical heritage. Already, several major stories have been determined: National Heritage Fellow Hugh McGraw lives in Bremen, GA and has worked tirelessly throughout his life to ensure that the tradition of Sacred Harp singing remains strong. In addition to Sacred Harp singing, separate gospel and African American shape-note singing traditions exist in the area. Harold Shedd, also from Bremen, has had a long, storied career behind the scenes of the Nashville’s music industry, producing dozens of number one hits for a wide variety of country artists. Thomas Dorsey, from Villa Rica, is now known as the ‘father of Gospel music.’ Prior to earning that distinction, he traveled with Ma Rainey’s blues band as ‘Georgia Tom.’ More recently, Zac Brown attended the University of West Georgia before rising to the status of a national recording star.

Further research will need to be conducted to identify other prominent stories in the region’s musical history. As well, places will be located where music is still being performed. For example, the bi-annual Sacred Harp singing at Holly Springs Primitive Baptist church draws hundreds of attendees from around the globe. An important part of the research will also be community outreach. Through a dialogue with those who have lived in the region and experienced its music, the stories that will be told through the project will be identified.

Considering the time restraints of a single semester of work, the spring 2013 group will focus on creating one deliverable for the project by the end of April 2013. The research will be combined to create a multi-panel rack card/brochure that can be professionally reproduced and distributed at strategic areas to promote knowledge of the region’s musical heritage as well as drive tourists to specific locations within the region. The brochure will combine historically accurate information on musical styles and individual artists with guides to locate places where these styles and artists presently exist. Through a dynamic presentation of images and text, it will highlight the diverse array of music in the region and place it in within the larger context of the state’s musical heritage.

Design of this brochure will be done within the group, and Pub & Print on campus will handle initial production of a small number of copies, allowing the budget to remain reasonable for the beginning of the project. This will also ensure that the brochure is easily editable while the project is in its formative phases. After this first run, all files and content will be handed over to the visitors’ bureaus for further production and use. At that time, recommendations and plans for future work on the project will be submitted.

The spring 2013 semester is a first step for what could develop into a much larger historical tourism project for the region and even the state. Already, the Center for Public History has a solid example of what can be accomplished in a heritage trail through the West Georgia Textile Heritage Trail. This project could evolve along similarlines. The work on the brochure could develop into a larger publication that allows for more depth of discovery while in the West Georgia region. This larger publication could be supplemented by a series of historical markers at significant places and Internet resources to encourage tourists to come to the region to go on a journey through its rich musical heritage. Work on the trail could be a catalyst for a statewide series of markers. Once these goals for the future of the project are determined and clarified, we will seek sources of funding through grants to ensure that work will continue after the end of the spring 2013 semester and that the story of West Georgia’s musical heritage can be told. 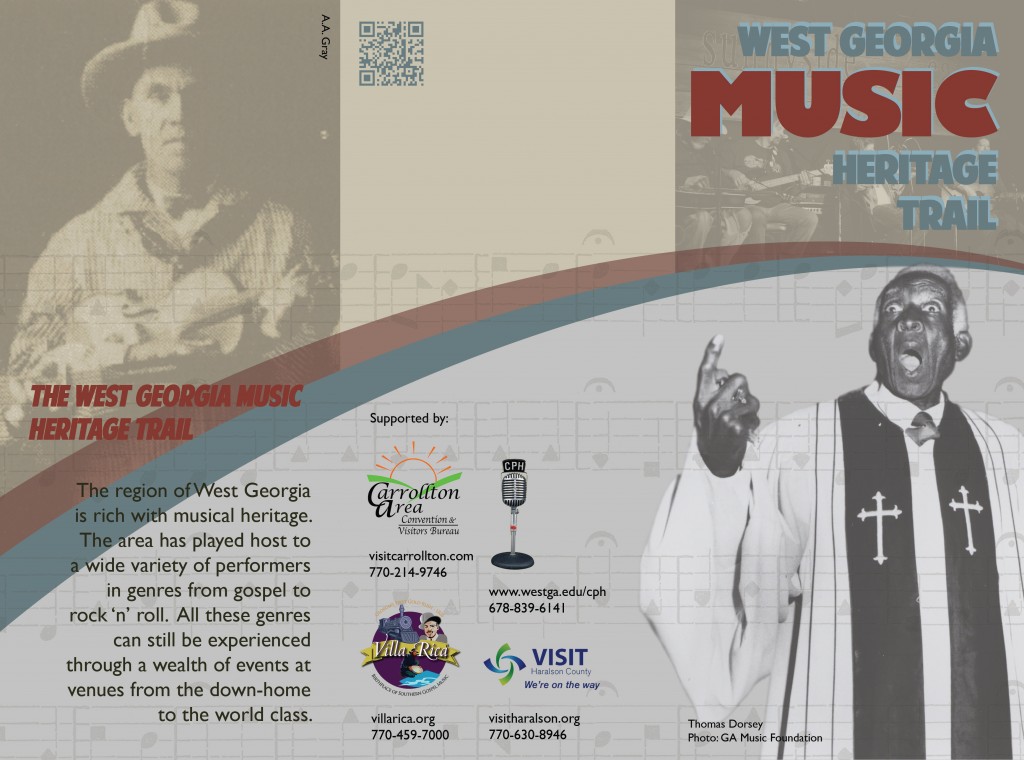 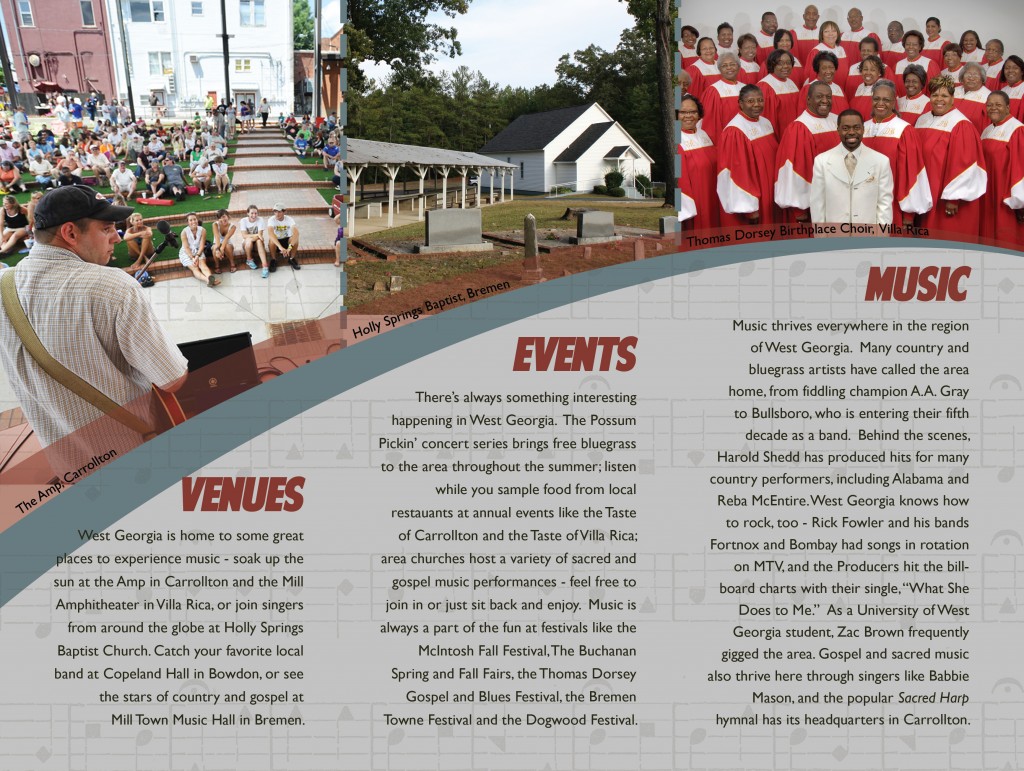